I had been planning on riding over the Cormet de Roseland for a while but I wanted to do something a little more interesting than just and out-and-back route. After getting a bit lost on a morning ride and ending up below the Cormet d’Arêches on this side, I figured a great loop over the Roseland, across to Col du Pre and then back over Cormet d’Arêches would be ideal. It would also involve some gravel…

In an effort to do some research on the route, I carried out the usual google searches and did a bit of reading online. Most blogs warned that it was “VTT” only, which of course did nothing to deter me. I then asked around locally. The local bike shop told me it was much better on a mountain bike (or VTT) while some other people told me it was simply impassable. I met one guy who was planning to drive over it and asked if he could take some pictures but when he never followed up, I figured I would just have to wing it. In my general experience, where a car can go, a road bike can follow.

Still, I generally don’t like going to potentially isolated gravel roads alone and so I convinced a French friend to come with me. And what a day it was!

From Tessens, we meandered down to the valley floor and took the cyclepath along to Bourg St Maurice. After living in Annecy, the local cyclepath is a dream. Shaded and quiet, meandering along the river Isère. It’s a fall flat uphill on the way to Bourg St Maurice (from Aime) and a slight downhill on the way back. If you were looking to mix things up slightly, there is also a road from Aime to Bourg St Maurice that runs parallel. Simply follow the signs to Macot and then along to Landry and continue north till you reach the turnoff to Les Arcs on your right, where you head across the river to your left into town.

It is a little tricky when you reach the end of the bike path but if you turn left and then follow the smaller road to your right, it will spit you out in the centre of town. From here it is well signposted to the Cormet de Roseland.

The 18km climb is fairly steady, mostly around 7 – 8% with a couple of flat sections along the way. The real highlight comes once you rise to the tree level and the alpine pastures

fall away around you. These final few kilometres are stunning, rocky alpages and hairpin bends wind up toward the Cormet. The famous lake is just a little further over and be sure to take pictures on your way down. On a calm, sunny day, you will be rewarded by reflections like mirrors in the turquoise waters. Mont Blanc is visible in the distance. And the views just keep getting better, particularly along the dam wall. 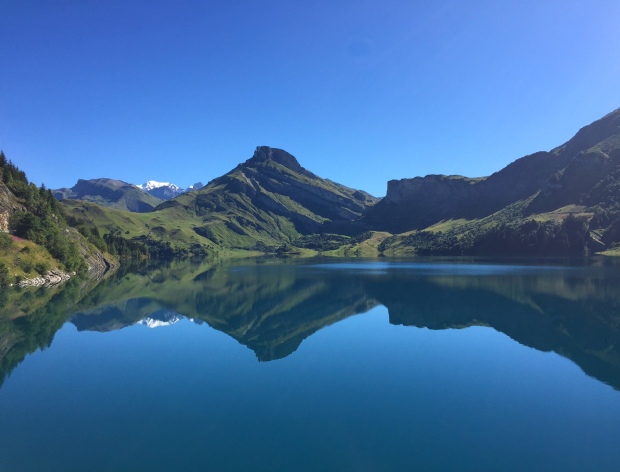 Stop, take pictures, enjoy the view, stock up on water at any number of restaurants along the road as there aren’t any public fountains (that I noticed) along the route.

From here, we followed the dam wall along to the other side of the

lake and climbed over the Col du Pre. The Col du Pre has a reputation for being a really tough climb and as we descended the “official” climb on the other side, I could see why. From this direction though it is just a few kil
ometres of alpage until you reach a little restaurant on top.

Again, the views down to the Beaufort valley below are worth

the detour but the route is steep and windy, and had a lot of loose gravelly bits when we descended, so keep one eye on the road. About half way down there is a single intersection and a sign off to the Barrage du St Guerin (the St Guerin dam) on your left. This is where you will join the Cormet d’Arêches climb. As you can see in the picture, you will not be climbing all the way from Beaufort but instead joining for the final 12.5km.

The climb itself only averages 7% but it is uneven, and frequently ramps up to double digits. The road is quiet and shaded on the bottom section, with frequent views up to the

couloirs around the crêts that line up on either side of the Cormet d’Arêches itself. The valley is steep on both sides and you should be treated with views of waterfalls as well.

Once you reach the St Guerin dam, stop to take some pictures – or enjoy an icecream if you need a break – and then take the road up to your left towards the Cormet. From here, the road narrows and you’ll pass a small farm or two but mostly hikers out enjoying the views.

About 3km from the top, the bitumen ends and you’re faced with some of the worst gravel you’ll ever want to attempt on a road bike. I quite enjoy a bit of gravel and was looking forward to giving French gravel 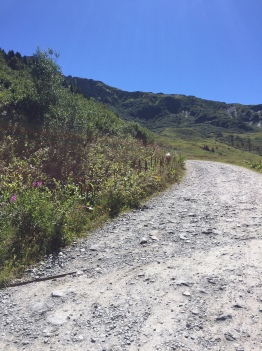 roads a go. But there’s a good reason the French don’t ride them and that is due to some pretty poor maintenance. Nothing like the gravel of Australia or the United States.

Large rocks are scattered across the road and you need to weave from side to side to find the best line on the climb. It is also steep and I made full use of my 32 cassette on the back just to be able to roll over it a little easier.

I spent a lot of time gritting my teeth and despising the route. But would I do it again? In a heartbeat. The views are phenomenal, you won’t see anyone much other than hikers, and there’s a sense of achievement when you get to the top. Not to mention the equal parts encouragement and bemusement from the hikers along the way!

Once you reach the Cormet d’Arêches sign, you can see the Refuge de la Croire down below. It is another 1km or so to the refuge – where I recommend stopping in for a drink and/or meal – but the road is much improved.

More road traffic seems to come up from this side and the route is better maintained. After the refuge it is a further 1km down some steep hairpins (I admit I put my foot down in the hairpins because it was pretty rough) and then you’ll be back on some gravelly bitumen before the road improves dramatically at a little bridge.

It is a steep, windy but fairly fast descent to Granier and then down to our starting place in Tessens. Enjoy the views on the way down, you’ve earned it. It may only be 84 km but the road conditions kept it fairly slow. Still, a fabulous day and a route I would highly recommend.

One thought on “The “impassable” Cormet d’Arêches + Col de Roseland”