Two cheese posts in a day. I guess it’s feast or famine Chez Frouleur. This little post is about a little cheese tasting I put together for an American friend in town last week. I wanted to showcase local cheeses, and more importantly, to highlight the diversity of Savoyard fromage.

When eating French cheese abroad, we are often limited to the bries and camemberts of the country plus the odd chèvre thrown into a salad. When I first moved to the Haute Savoie and was faced with rows of tommes, I wasn’t quite sure what to make of it. It wasn’t that narrow range of creamy French cheeses I had always found on cheese platters before. But as I have slowly worked my way through them, I’ve been pleasantly surprised by the diversity. And so today, I chose a creamy chèvre (a Coeur de Savoie – or heart of Savoy), a Tomme de Brebis (but different from the tommes discussed in my last post), and something entirely new to me – the Persillé de Tignes, from the Savoie alps. 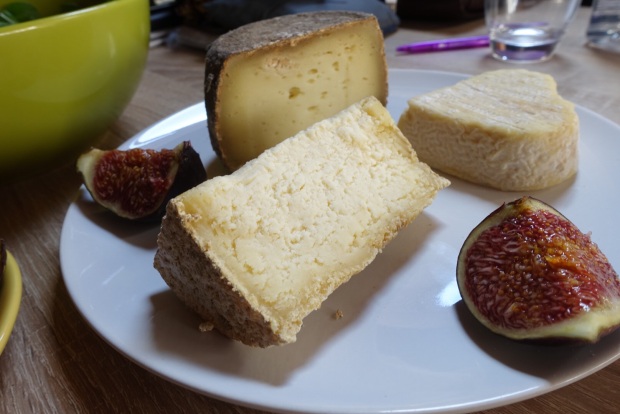 We all know what creamy chèvre tastes like – although when shaped like a heart, it certainly adds to the aesthetic – and I’ll get to the tomme later but the Persillé was something I’d never experienced before. Indeed, it’s apparently quite rare, with very few farmers still making the variety.

Persillé de Tignes is named for the area of the Haute Tarentaise where it is produced [aside: Tignes is also a popular ski resort near the Col de l’Iseran and in the same general geographic region] , a region marked by steep valleys and alpine pastures that are covered in snow for several months of the year. This particular Persillé is made from 80% cow’s milk and 20% goat’s milk, and according to the woman in the shop is also a mixture of morning and night milkings but this can’t be verified. The term ‘persillé’ refers to the marbling effect you get from the mixture – it is often used to describe blue cheese – which has a curdled texture that is somehow both smooth and crumbly at the same time.

At first, I wasn’t sure what to make of it the cheese and almost dismissed it’s slightly dry taste. But after a second bite, and a third, I realised that the delicate flavour lingered on my tongue just as the cheese wanted to cling to the roof of my mouth. I gave up on the bread and tried eating it plain. It was delicious. 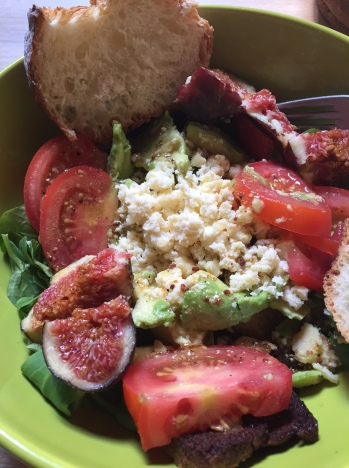 But then on a whim, I crumbled it on top of a salad (I rarely eat salad so this was an unusual occurrence on many levels) and it took it to a new level. The avocado and dressing brought out the saltiness in the cheese, while the sweetness of the fresh figs balanced the flavour.

As I mentioned in my last post, taking fine, rare French cheese and putting it on a salad might have me swiftly booted from France but I stand by my actions. This cheese is divine on its own but why not also crumble a little on some lightly seasoned garden tomatoes with quality olive oil? In fact, it was so good, I made a bit of a Persillé Bruschetta the next day and it was unbelievable.

The cheese itself apparently changes as it ages, becoming less creamy and more musty with age. I will report back if I find some. Regardless, this little-known lactic gem is a worthy addition to any cheese platter and one to impress your snobbier friends (the rarity alone will win you kudos).

2 thoughts on “Go on, crumble that cheese”